[NEW YORK, NY, October 28, 2017] – From October 23 through 28, independent producers, writers and directors; representatives from the leading networks, studios, agencies and digital platforms; and TV fans gathered in Manhattan for the 13th annual New York Television Festival (www.nytvf.com). The Festival wrapped with an awards reception at the Helen Mills Theater and Event Space, where winners of NYTVF’s pilot and scripts competitions were announced along with recipients of deals from NYTVF’s development partners. 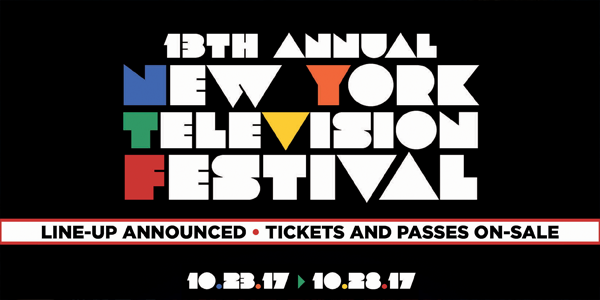 [NEW YORK, NY, September 21, 2017] – The NYTVF today announced schedule highlights for the 13th annual New York Television Festival, which takes place Monday, October 23 through Saturday, October 28, 2017, primarily at the Helen Mills Theater and Event Space and SVA Theatre in Manhattan. The NYTVF will host an extensive slate of special events for the more than 250 Official Artists who have been invited to the Festival; executives from NYTVF industry partners representing the leading TV networks, studios, digital companies and agencies; as well as other industry members and TV fans.

“When we launched the first TV festival a dozen years ago as a showcase for independent creators and their work, we never could have imagined that it would develop into what it is today – an annual destination for industry executives looking to discover new talent, artists looking for access to these decision-makers, and fans interested in not only getting a sneak peek at some of the best-told stories on TV, but also hearing directly from the talent that created it in an intimate setting,” said Terence Gray, NYTVF founder and executive director. “We as always are excited to be a part of this discovery, and lucky to be in a position to facilitate what we feel are important conversations about the world’s greatest artistic medium.”

The box office for this year’s Festival opens today, along with the full schedule for the week, event ticketing and pass information. This includes the option to purchase a Festival Pass or Industry Pass – which provides access to all of the below events – as well as tickets to individual events, many of which are free with advance registration.

Projects Have Opportunity to Showcase their Work and Meet with Network, Digital, Agency and Studio Execs at October TV Fest

[NEW YORK, NY, August 17, 2017] – The NYTVF today announced the Official Selections for its second annual NYTVF Scripts Competition, which expanded this year to for the first time accept drama pilot scripts from writers worldwide. The 20 comedy and drama scripts selected will be showcased to industry executives at the 13th Annual New York Television Festival, taking place October 23 through 28 in Manhattan.

“For more than a dozen years of running the NYTVF, we’ve gotten spoiled by the level of talent that share their work with us, but this year the Scripts selections are really a cut above. Truly unique voices from established writers and unknowns, this slate embodies the breadth and scope of today’s dynamic television landscape,” said NYTVF Founder and Executive Director Terence Gray. “With embryonic TV events being launched by film festivals and other groups, it’s truly exciting for us that our core mission – to facilitate discovery, foster talent, and bring down barriers for storytellers – continues to propel the industry careers of so many creative individuals and companies year after year.”

Pilot creators will enjoy opportunities to pitch, network with, and learn from executives representing the top networks, studios, digital platforms and agencies Official Selections – including 37 World Festival Premieres – to be screened for the public from October 23-28

[NEW YORK, NY, February 8, 2017] – The NYTVF, the first recognized independent television festival and an organization dedicated to identifying and nurturing top creative talent and connecting it with industry decision-makers, announced the official launch of its 2017 season, including key dates for its flagship initiatives. This includes the 13th annual New York Television Festival, which will take place from October 23 to 28 in lower Manhattan.

This year, building off its record-setting 2016 efforts that saw substantial increases across all submission categories and in the total number of participating industry decision-makers, the NYTVF is also expanding its event programming and outreach to the independent artists, in order to build upon its strong track record facilitating relationships and providing them with information that will advance their careers. This includes: adding a day of programming to the October Festival aimed at television writing; opening up the 2nd annual NYTVF Scripts competition to accept hour-long drama work for the first time (while continuing to accept half-hour comedies); and launching the first NYTVF Chicago.

truTV TEAMS WITH NYTVF IN SEARCH FOR CREATOR-DRIVEN COMEDY FORMATS

[NEW YORK, NY, December 19, 2016] – The NYTVF today announced, in partnership with truTV, the first-ever truTV Comedy Breakout Initiative, providing independent television creators with a unique development opportunity to create new formats for the comedy-centric network. Seeking both scripted and unscripted ideas, truTV is offering the winning creator(s) a shot at a development budget of up to $25,000 to further hone their idea in collaboration with its executive team.

If you are an accredited member of the press and would like additional information about the NYTVF, please contact the NYTVF press team at: