A secret force of government agents assigned to investigate alien happenings adjust to their new and overly emotional teammate: a super A.I. in a hunky new human body.

A women's studies professor and her free-spirited, dysfunctional black family face the challenges of living in the type of town where all 80s/90s films with no black people could take place.

Three hapless, small time crooks dream of being notorious criminals, but first, they’ll need to prove to the world that they’re capable of pulling off even the simplest of crimes.

13-year-old Doobie lives with his mom, but as she's always working, he is locked out of his home each day after school. Doobie must forage for food and friendship in a neighborhood filled with agenda-laden characters from all walks of life.

Gemma learns that she's bipolar during her senior year of college and annoyingly, it doesn't manifest itself in the cute, "manic pixie dream girl" way that it's supposed to...but whatever, it's fine.

A quarter of the US population has just had every text, email and picture hacked and leaked online. How does a newly-married couple keep life normal when the wife's been hacked and the husband hasn't?

When the ultra violent “hero” Judge Jury attempts to stop an armed robbery, his ass-backwards attempts to impress his socially conscious teenage daughter end up pushing her into the arms of his enemy.

A serial killer turned suburban stay-at-home mom balances “family first” and “murder in the first” in this dark comedy.

A well-meaning idiot gets fired from his low-level NASA job and starts his own ramshackle space administration across the street, hoping to beat them to Mars as revenge.

When an ex-stripper is outed as the "side chick" to a famous married couple, she finds herself at the center of a media firestorm. A comedy about slut-shaming, cyber-bullying, and the rise of an unlikely feminist hero.

MJ Walsh is a mother who is entirely too involved in her adult-children's lives. While she has a handle on her kids' physical whereabouts, she fails to notice the intimate secrets they are keeping from her.

This fast-paced anthology series tells the true story of the Lincoln County War, a bloody opera of power and politics that left dozens dead and created the most enduring icon of the American West...Billy the Kid.

When a border patrol agent is recruited to work as a spy to help overthrow a country, he doesn’t realize that the country he enters is a parallel America on the verge of collapse.

When a failing, predominantly African-American elementary school in Brooklyn loses its principal, a younger, white man steps in as her replacement. Regarded as the epitome of gentrification, he has just two years to turn the school around before it’s permanently closed.

The Masters of Business

A young woman from a humble background is unprepared for the rigor and cutthroat nature of the Wharton MBA program and must learn to adapt to the rules of this uncertain new world.

Set in an immediate future, this grounded sci-fi series dramatizes humanity’s imminent encounter with catastrophic climate change. All must rise to the challenge of forging a new civilization or be swept away by the sea.

An educated and affluent African-American woman must take in her ghetto-raised niece when her sister is put in jail.

A fundamentalist Christian teenager wrestles with her racial and sexual identities in 1990s South Dakota.

A small selection of writers (21 writers representing 15 projects) have been designated as NYTVF Scripts Notable Writers. These writers will be invited to attend the 2017 Festival and are eligible to participate in Festival Development Chats, Networking Happy Hours, and the 2017 Writers’ Workshop.

Congratulations to all Official Selections and Notable Writers!

Over the last decade, the NYTVF has distinguished itself as an industry leader in the cultivation and fostering of independent artists across episodic storytelling platforms while engaging a wide swath of decision-makers, buyers, agents, and managers as a trusted curator of new voices. With NYTVF SCRIPTS, that opportunity is extended to emerging writers by offering a Festival experience designed to provide maximum exposure, access, and opportunity.

In its second year, NYTVF Scripts is accepting original, half-hour comedy series as well as hour-long drama series scripts for consideration by broadcast, cable, and digital platform buyers. A select number of both drama and comedy scripts will be chosen as Official Selections and the writers will be invited to participate in the Festival as Official Artists. To enter, writers must submit a series pilot script (length requirements below), an original series overview (up to 4 pages), and a current C.V.

Want to get your script in front of decision-makers across the television and digital landscape, culminating in a week-long Festival that provides a crash course in the TV Industry? Submit to NYTVF Scripts and join the indie television movement.

The 2017 NYTVF Scripts competition is now closed for submissions. Thank you to everyone who entered.

Use the links below to explore the various aspects of submitting to the NYTVF Scripts.

For more details, check out the Submissions F.A.Q. here and download the Official Rules here.

The writers/writing teams of NYTVF Scripts Official Selections will receive designation as Official Artists and be invited to the New York Television Festival, held in NYC in October 2017. This includes an invitation to participate in the 2017 NYTVF Writers Workshop, a day-long series of panels and workshops specifically tailored to TV writers, taking place during the 2017 New York Television Festival.

All scripts designated as Official Selections will be available for pre-Festival review via NYTVF Connect by participating industry representatives, development partners, and jury members. In 2016, over 75 companies took part in NYTVF Connect, yielding over 500 meetings with Festival artists.

One comedy and one drama script will be recognized as the 2017 NYTVF Scripts Best of the Fest during the Awards presentation of the 2017 New York Television Festival on October 28, 2017.

In addition to the Official Selections, a small selection of writers will be designated as NYTVF Scripts Notable Writers. While their scripts will not receive designation as Official Selections, they will be invited to attend the 2017 Festival, and they will be eligible to participate in Festival Development Chats, Networking Happy Hours, and the 2017 Writers Workshop free of charge. Notable Writers will NOT be eligible to participate in NYTVF Pitch or Executive Access.

The NYTVF Scripts competition accepts entries beginning on April 11, 2017 and ending May 16, 2017 or until 2,000 comedy scripts and 1,500 drama scripts are submitted, whichever comes first. Writers are permitted to submit multiple entries to the competition. All entries must be received by the NYTVF no later than 11:59am (noon) EST on May 16, 2017. Final notification for all Official Selections to the NYTVF Scripts Competition will be made around mid-August 2017.

Have questions? Check out the submissions F.A.Q. page or email us at scripts@NYTVF.com. GOOD LUCK! 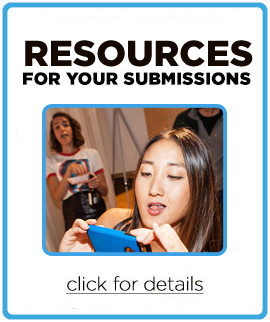